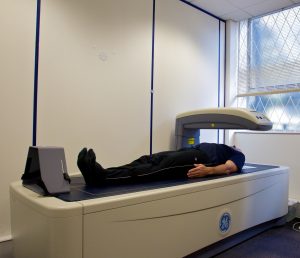 The importance of DXA is underscored by the fact that BMD is a strong independent predictor of an individual’s risk of sustaining fragility fractures. A clear relationship has been established in postmenopausal females between BMD results and the risk of osteoporotic fractures. For every standard deviation drop in DXA-calculated bone density (equivalent to a 10-12 percent bone loss in the spine), the individual’s fracture risk increases by up to 2.5 times. What are the advantages of DXA scan and how does it compare to other modalities used to measure bone density?

Osteoporosis is associated with severe morbidity and mortality. Timely diagnosis and treatment can reduce the adverse effects of the disease considerably. Therefore, diagnosis of osteoporosis is one of the main advantages of DXA scan. This should ideally be performed before the first fracture occurs. It is noteworthy that whereas conventional radiographs are good at detecting fractures, they are insensitive in detecting bone loss. In fact, bone loss only becomes evident on plain radiographs after an approximately 30 percent loss in bone mass has occurred.

The primary advantages of DXA scan are that it is a simple, quick, and noninvasive test that does not require anesthesia. A DXA exam typically takes 10 minutes to perform and is painless for the patient. In addition, DXA exposes the patient to a very small amount of ionizing radiation. This is less than 10 percent of the dose associated with a standard chest X-ray. The radiation exposure from a DXA scan is also less than a person’s daily natural radiation exposure. Some second-generation DXA scanners, however, expose a patient to high doses of radiation to the order of 35 mGy.

There are two primary advantages of DXA scan over SXA (single-energy X-ray absorptiometry). The results are more accurate and it can be used at non-peripheral sites. This includes clinically relevant fracture-prone locations like the hip and spine. These features make DXA a superior technology compared to SXA which is now largely obsolete. For these reasons, DXA is the gold standard in bone mineral density measurement.

It should be noted, however, that despite all the advantages of DXA scan, it does expose a patient to some ionizing radiation. This is why DXA bone densitometry is usually not performed in pregnant women. Another limitation of DXA is that it can only predict a person’s relative risk of fractures. It cannot absolutely predict whether a person will or will not experience an osteoporotic fracture. This is due to the fact that the risk of osteoporotic fractures is influenced by a number of factors. These include age, weight, personal fracture history, family history of prior fractures, alcohol consumption, cigarette smoking, and fall risk.

DXA can be used to measure spine and hip BMD in almost every patient. However, in certain situations, an alternative site, the forearm (also called one-third or 33 percent radius) is utilized. This is done when the BMD is unmeasurable at the hip or spine. Forearm measurements are used in extremely overweight patients (who exceed the weight limit of the DXA table). It is also used for patients with hyperparathyroidism.

Despite the many advantages of DXA scan, there are some limitations. DXA cannot accurately measure bone density in people who have spinal deformities. It also cannot be used in people with a previous history of spinal surgery. Conditions such as osteoarthritis and vertebral compression fractures may also interfere with the accuracy of DXA results.

It is noteworthy that quantitative CT calculates volumetric bone density in grams/cubic centimeters as opposed to DXA which measures areal BMD in grams/centimeters squared. Therefore, QCT may be the preferred method of measuring BMD in individuals with spinal degeneration and calcifications of the abdominal aorta where DXA tends to overestimate BMD. Studies have also found that QCT is more sensitive than DXA in detecting osteoporosis in postmenopausal women. However, the one of the key advantages of DXA scan over QCT is its widespread availability.

There are two types of DXA machines. Central DXA scanners pass over the patient’s lower spine and hip and are used to predict the risk of fractures. A scaled-down version known as peripheral DXA or pDXA uses instrumentation that can measure bone mineral density at peripheral sites such as the finger, forearm, or heel. This relatively inexpensive test is used to identify people who would benefit from more detailed BMD testing. This is another one of many advantages of DXA scan.

However, interpreting the results of a pDXA scan is tricky because there is no set threshold that determines who qualifies for further testing. A threshold that is too low will result in too many healthy people undergoing unnecessary and expensive DXA testing. A threshold that is too high will result in at-risk individuals failing to receive necessary evaluation, timely diagnosis, and effective treatment of bone disease. Presently, there is no scoring system for pDXA that is superior to the available risk analysis tools for determining which individuals should undergo BMD measurement of the spine and hip with DXA.

Although there are many advantages of DXA scan central scanners, the key benefit of peripheral scanners is that they are smaller and less expensive machines. They calculate BMD at peripheral locations like the wrist and heel. Peripheral DXA (pDXA) is less sensitive than central DXA. Therefore, although a pDXA test performed at the wrist or heel may be useful in predicting a person’s risk of fragility fractures, it is not helpful in assessing need for pharmacotherapy or in monitoring response to therapy. In other words, if pDXA indicates the need for drug therapy, a baseline central DXA test should be performed to confirm the diagnosis before initiating therapeutic intervention. However, peripheral DXA is useful in settings such as physicians’ offices, pharmacies, health fairs, and shopping centers as an initial screening tool.

What is the Best BMD Testing Technology?

To summarize the differences between different BMD testing technologies, in terms of diagnosis of osteoporosis based on WHO classification, DXA is the standard and peripheral DXA has limited value. The various advantages of DXA scan have made it the most widely used BMD testing technology. QUS, QCT, and pQCT cannot be used for diagnosis of osteoporosis based on WHO criteria. Prediction of fracture risk, however, is possible with all available technologies. It is possible to monitor changes over time with DXA and QCT, but not with pDXA, pQCT, and QUS. The ionizing radiation associated with QCT is the highest. Radiation exposure is moderate with pQCT and DXA, low with pDXA, and zero with QUS. In terms of cost, QCT is the most expensive test, pQCT and DXA are moderate in cost, and pDXA and QUS are low-cost testing technologies.

We offer a range of e-courses for X-ray CE credits. To complete your ARRT requirements, please purchase one or more of our online courses. Our bone densitometry test will earn you 23 CEUs out of the 24 credits required every biennium.

Thank you for choosing CE4RT.com.
Have any questions? Want to tell us how we are doing? Maybe you have suggestions on how to make our courses or site even better? We'd love to hear from you, just give us a text or call at 657-222-0777