Look Up Tables in Radiography: What Are They? 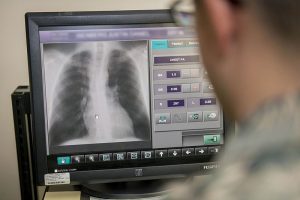 What are look up tables in radiography? The gray-scale values in a digital image consist of binary numbers. It is possible to reassign these numbers to other values based on predetermined rules. These rules are defined in a look-up table (LUT) which is essentially a reference histogram. A look-up table (LUT) is a series of mathematical equations that are used for post-processing in radiography. It is used to correct values using a mapping function. It allows the gray-scale values in the recorded image to be remapped to new values to improve the final image in some way, such as appropriate brightness and contrast. LUTs are specific to anatomic areas.

How do look up tables work?

The look up tables in radiography assign an output value to every possible input value. This allows calculations to be done very quickly. In image processing, a look-up table is used to change the input data into a more desirable output. The characteristic curve can be applied to the digital image to make even slight shading more clearly visible. The LUT consists of data stored in the computer that serves to substitute new values for each pixel in the image during processing. It cross-references index numbers to output. LUTs are not only used in diagnostic workstations, but also in digital radiography X-ray machines on the capture side for the computer to monitor the brightness of the final image. In the situation that a digital radiograph is either too light or too dark, the computer will check the LUT and process the image accordingly to make it look better.

The use of look up tables in radiography can potentially significantly improve operational efficiency in the imaging department without compromising on image quality.

To compare with an overexposed plain cellulose film, chemical processes make the film darker when viewed with backlighting on a view box. The narrow dynamic range of film / screen radiography does not accommodate a large range of exposures compared to digital. Once the film is totally black, it becomes unresponsive to further exposure, and if the film is overdeveloped or overexposed, it cannot be undone to go back and see an image – the exam would have to be redone.

Using hand developing, some adjustments could be made with developer time and temperature to, for example, under-develop a film known to be overexposed. But automatic processors have deliberately attempted to remove these variables to reduce errors. However, even with this, because of the narrow range of exposure with film radiography, it may be necessary in some situations to obtain more than one radiograph at different exposures to adequately evaluate and visualize all tissues.

The LUT can be graphed as a curve that maps pixel values to monitor brightness and allows digital images to match exposures we were familiar with on film / screen systems. Digital radiographs that are too dark or too light may be adjusted by LUT to improve image quality without an adjustment in radiographic technique. Software programs used to display images allow look up tables in radiography to be interactively adjusted by window and level or contrast and brightness. The window / contrast determines the pixel range, and the level / brightness determines the center of the range.

Dangers of Using Look Up Tables

While the LUT can be adjusted interactively with the help of a digital display program, it is important to understand that once an image has been altered in the preprocessing phase, the lost information can no longer be retrieved by the software. When raw data is processed using LUT, some information is lost or destroyed because only bits in the display range are stored. A typical example of this is clipping or masking at the modality before sending the images to PACS. Images that are changed during processing with look up tables in radiography cannot be adjusted again as if they were the original by the display software later on.

While a wide dynamic range is attainable with digital X-ray systems, greatly exceeding the range attainable with film or screen radiography, the display range of film and computer monitors is narrow, and the wide range of exposures cannot be viewed in a clinically or diagnostically useful way. In digital radiography, image processing is necessary, as it allows for all the anatomic areas to be viewed in the image at once.

Image processing allows all relevant anatomic areas to be viewed on one image by the use of different LUTs. However, it is possible that artifacts appear due to image processing.

With mathematical manipulation, contrast can be maintained while minimizing the range of displayed pixel values. A process called unsharp masking involves making a copy of the radiograph, blurring it, and subtracting it from the original. Bones are not clearly visible on the blurred image, but areas of high pixel value appear black, and areas of low pixel value appear white. With subtraction, pixel values become closer to each other with preservation of bone edges, making all anatomic structures visible because exposure differences are removed without altering anatomic detail. LUTs are just one method of image post-processing that are currently in use in radiology departments.

Did you enjoy learning about LUTs? To improve your knowledge about technology that makes radiography more efficient and accurate, buy our course on PACS and Digital Radiography, which is worth 18 ARRT CE credits. We also have courses for Mammography CE and Fluoroscopy CE.

Learn more about PACS, Digital imaging, and other subjects and get 19 Category A ARRT CE Credits in the X-Ray CE Course “PACS and Digital Radiography”