Types of Radiation: Why Are X-Rays Used in Medical Imaging? 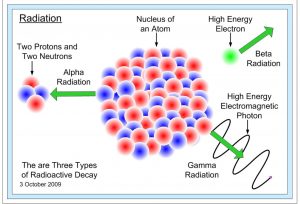 Radiation is the transmission of energy through space. There is typically a source of the radiation, a radiation beam, and some material which absorbs the radiation. In diagnostic radiography, the X-ray device is the source of radiation and it emits a radiation beam that is absorbed by the patient. What are the different types of radiation? And why are X-rays preferred for use in medical imaging?

There are two major types of radiation – particulate and electromagnetic. Both types transfer energy to the matter with which they interact. Particulate radiation is emitted by linear accelerators from the decay of radioactive materials. Radioactive decay refers to the emission of charged (alpha and beta) or neutral (neutron) particles from the nucleus of an atom. The radioactivity of these materials is measured in Curie or Becquerel. One Becquerel is equivalent to one nuclear disintegration per second.

The first type of particulate radiation is the alpha particle. It consists of a pair of protons and a pair of neutrons. It has a positive charge and is the heaviest type of radiation particle. Alpha particles are emitted by radioactive materials such as uranium and thorium that occur naturally in the earth. Radon, which is a colorless and odorless radioactive gas present in our homes, also decays by the emission of alpha particles.

The second among the types of radiation (particulate) is the beta particle. It consists of a free-floating electron that is unattached to an atom. It has a negative charge and small mass. Beta particles are emitted by tritium and carbon-14 which is used to date fossils and archeological artifacts.

The third type of particulate radiation is a neutron. It is present in the nucleus of an atom and does not have a charge. Neutrons are emitted in nuclear reactors. They make it possible for us to generate nuclear power.

Particulate radiation is not useful in medical imaging due to its low tissue penetrability. Electromagnetic radiation (EMR) has no mass or charge and consists of waves or matter-less packets of energy called photons that move through space at the speed of light. EMR can penetrate matter and can be blocked by dense materials such as concrete and lead. These properties make this type of radiation useful in diagnostic medicine. They can show broken bones or locate tumors. Shielding with dense materials like lead makes it possible to prevent exposure of the patient’s sensitive organs. Radiologic technologists wear lead aprons to protect themselves from radiation exposure. 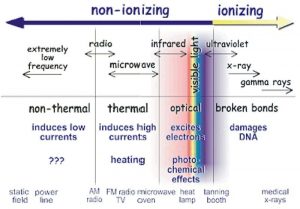 X-rays are a type of EMR. EMR has two characteristics – wavelength and frequency – that are inversely proportional to each other. At one end of the spectrum are radio waves with low frequency and long wavelength. At the other end of the EMR spectrum are gamma rays and X-rays with high frequency and short wavelength. In between the two ends are microwaves, infrared light, visible light, and ultraviolet light, which have increasingly higher frequencies and shorter wavelengths, respectively.

The lower end of the electromagnetic spectrum (for example, radio waves, microwaves, infrared and visible light) is classified as non-ionizing type of radiation. Non-ionizing radiation is characterized by a low frequency (i.e., less energy) and consequently low tissue penetrability. The upper end of the electromagnetic spectrum is classified as ionizing (for example, ultraviolet light, gamma rays, and X-rays). Ionizing radiation is characterized by a shorter wavelength and high frequency and has enough energy to remove electrons from atoms (i.e., to ionize atoms). The interaction of these ions with living tissue can potentially lead to biological damage. Learn more about radiation protection with our course ALARA in Digital Radiography and earn 4 CE credits as well!

X-rays, on account of their high frequency, carry more energy and have high tissue penetration, which is why they are the type of radiation used in medical imaging. Radiation is measured in units called radiation absorbed dose (rad) and Gray.

If you’re looking to complete your ARRT required CE credits, visit our X-ray continuing education page. We have a range of online courses with category A credits for ARRT and other registries. Once you pass the easy open-book post-test, you are immediately sent a certificate of completion. Still got questions? See our FAQ page.