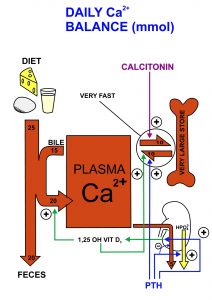 There are three calcium regulating hormones in humans that play a critical role in regulating the calcium level in the body and maintaining healthy bones. These hormones are parathyroid hormone, calcitriol, and calcitonin. Parathyroid hormone stimulates bone formation and bone resorption and maintains the level of calcium in the body. Calcitriol, which is produced from vitamin D, stimulates the intestines to absorb sufficient amounts of calcium and phosphorus and also has a direct effect on bones. Calcitonin is responsible for inhibiting the breakdown of bones and protecting the body against abnormally high calcium levels.

Excessive secretion of PTH, which is one of the calcium regulating hormones in humans, is called hyperparathyroidism. Excess PTH, such as from a secretory tumor of the parathyroid glands, can lead to bone loss. In addition to bone resorption, PTH has been found to stimulate bone formation and make bones stronger when the hormone is given in small amounts intermittently. Newer treatments of osteoporosis are based on this function of PTH.

More recently, another hormone called PTH-related protein has been identified. Under normal circumstances, this hormone regulates the formation of bone and cartilage in the developing fetus. In individuals with certain types of cancer, a condition known as hypercalcemia of malignancy occurs due to the over-production of PTH-related protein, which functions like PTH and causes excessive breakdown of bones and abnormally high levels of calcium in the blood.

Also known as 1,25 dihydroxy vitamin D, this is one of the calcium regulating hormones in humans. It is a derivative of vitamin D. Enzymes in the kidneys and liver produce this hormone which acts on many different tissues and organs. The most important function of calcitriol is to increase the absorption of calcium and phosphorus from the intestines and make these minerals available to the skeleton. Vitamin D is not an essential dietary element and can be manufactured in the skin from cholesterol by the action of ultraviolet light (sunlight); therefore, it is not technically a vitamin. However, if a person does not have adequate exposure to sunlight, this can lead to low levels of vitamin D, which must be supplemented by dietary sources.

The need for dietary vitamin D has increased in recent times. Deficiency of this vitamin has become more common because people are spending increasing amounts of time indoors and staying well covered when outdoors to prevent sunburn. People living in northern latitudes are particularly prone to vitamin D deficiency because in these parts of the world the sun’s rays are not strong enough for the skin to make sufficient vitamin D. Vitamin D is linked to the calcium regulating hormones in humans.

When there is deficiency of vitamin D in the body, it results in defective mineralization of bone and a condition known as rickets or osteomalacia (in children and adults, respectively). Rickets is associated with bone pain and a characteristic bowing of the legs and other bone deformities. Osteomalacia is associated with an increased propensity to fracture. Supplementation with vitamin D can restore bone calcium and reduce the loss of bone.

In addition to parathyroid hormone and calcitriol, the third one of the calcium regulating hormones in humans is called calcitonin. It is produced in the thyroid gland (by different cells than those which produce the thyroid hormones). Calcitonin inactivates osteoclasts and prevents the breakdown of bone. Calcitonin plays an important role in bone development and calcium regulation early in life. In adults, the action of this hormone is transient. An excessively high or low level of calcitonin in an adult does not cause problems with blood calcium concentration or bone strength. Nonetheless, it is possible to use this hormone as a drug to treat bone disease.

In addition to the three calcium regulating hormones in humans – PTH, calcitriol, and calcitonin – sex hormones, such as estrogen and testosterone, play an important role in regulating skeletal growth and maintaining bone mass and strength. In both men and women, estrogen and testosterone have an effect on bone health. The increased bone formation or growth spurt during puberty is supported by sex hormones. Cartilage plates at the ends of long bones allow these bones to increase in length, leading to the dramatic gain in height typically seen during puberty. In late adolescence, the high concentration of sex hormones leads to a closure of the epiphyseal growth plates and replacement of cartilage by bone at these locations. This prevents any further growth in height post-puberty.

Similar to calcium regulating hormones in humans and their effect on the skeleton, estrogen stimulates the formation of new bone. It also acts on osteoclasts to inhibit the breakdown of bone at different stages of life. In menopausal women, there is a marked decrease in the level of estrogen in the body. This is the reason menopause is associated with rapid loss in bone mass. Hormone replacement therapy (HRT) with exogenous estrogen is given to menopausal women as a means of preventing this age-related bone loss. However, the use of HRT is controversial because this therapy is associated with an increased risk of breast cancer, cardiovascular disease, and blood clot formation.

Calcium regulating hormones in humans affect bones through calcium regulation. Testosterone plays an important role in skeletal growth through a direct effect on bones. Testosterone also stimulates the growth of muscles, which places stress on the bones and thereby stimulates bone formation. Fat cells convert testosterone to estrogen, so testosterone can serve as a source of estrogen in the body. Estrogen is important for bone health in both men and women. As a matter of fact, the level of circulating estrogen hormone is higher in older men compared to older (postmenopausal) women.

Other Hormones Involved in Bone Health

The skeletal growth seen during puberty is accelerated by the growth hormone. In older individuals, the production of growth hormone and IGF-1 decreases, which is why, with age, there is a reduced ability to replace resorbed bone or form new bone rapidly. Although growth hormone and IGF-1 stimulate both bone formation and bone resorption, their primary action is on the bone-forming cells with a resultant increase in bone mass.

In addition to the calcium regulating hormones in humans, hormones produced by the thyroid glands affect bones because they increase the energy produced by all the cells in the body, including the bone cells. This increased energy production leads to an increase in bone formation as well as bone resorption. A deficiency of thyroid hormones during childhood leads to impaired growth. Abnormally high levels of thyroid hormones in the blood can lead to excessive breakdown of bone and a weak skeleton. In addition, it is believed that TSH or thyrotropin, a pituitary hormone that regulates the production of thyroid hormones, may also directly affect bones.

Cortisol, a hormone produced by the adrenal glands, is vital for the regulation of metabolism in the body. It plays a critical role in the body’s ability to cope with injury and stress. The effects of cortisol on the skeleton are complex. While small amounts of cortisol are necessary for bones to develop normally, when present in large amounts, cortisol blocks the growth of bones. Therefore, it is one of the hormones that has an effect on bones in addition to the calcium regulating hormones in humans.

Glucocorticoids (synthetic cortisol) are used to treat diseases such as arthritis and asthma. If taken for prolonged periods of time, these drugs can lead to bone loss due to increased bone breakdown and decreased bone formation. Therefore, prolonged treatment with high doses of glucocorticoids can put an individual at a high risk of fractures.

In addition to the above-mentioned calcium regulating hormones in humans, some other hormones circulating in the bloodstream have an effect on the skeleton. Insulin plays an important role in the growth of bones. In people with insulin deficiency, there is an impaired response to other bone growth stimulating factors. Leptin, a recently discovered hormone that is manufactured by fat cells to regulate energy balance, is also believed to affect the skeleton.

All have a range of e-courses that are category A credits for your ARRT CE requirements, accepted by NMTCB, ARDMS, SDMS,  every US state and territory, Canadian province, and all other Radiologic Technologist, Nuclear Medicine, and Ultrasound Technologist registries in North America, for both full and limited permit technologists, guaranteed. Choose a course with the number and type of credits you need.